Companies who often deal with Big Data have massive databases and millions or billions of files they are processing. Choosing the right technology to process such big data is a daunting task! Most importantly, obtaining real-time insights an uninterrupted supply of data to that processing platform is even more difficult. To help with this, a concept was created called Data Streaming. Data Streaming, as the name implies, is a stream or flow of raw data that is captured from multiple sources and sent for processing continuously. These streams of data hold great value as they contain real-time information about an ongoing transaction or process. Analyzing and processing such data streams makes an organization more efficient and opens up new opportunities.

What is Apache Kafka?

Kafka is a fast, horizontally scalable, fault-tolerant, distributed data streaming platform originally started as an internal project at LinkedIn. It later became an open source project at in 2011. This project was originally written in Scala and Java. It provides a publisher-subscriber mechanism that enables processing and storing streams of data in a fault-tolerant way.

Kafka acts like a plugin technology that can be used with a wide range of technologies like Spark, Hadoop, Storm, HBase, Flink and many others for big data analytics. It can be used to build real-time streaming applications that react to streams to do real-time data analytics, transform, react, aggregate, join real-time data flows, and perform complex event processing. The most common use cases for Kafka include stream processing, messaging, website activity tracking, log aggregation and operational metrics.

Cazton has Kafka Consultants who can provide expert guidance for your Kafka cluster management, big data streaming and processing requirements. Our experts have hands-on experience in standing up and administrating on-premise Kafka platform and managing Kafka clusters on Windows, Linux and cloud platforms like Azure, AWS & EMC. We are well-versed with Kafka API and understand the best practices for stream management and processing.

As we move ahead to know more about Kafka, it is important to understand some of its core concepts. Knowing these concepts will help you understand how Kafka works. 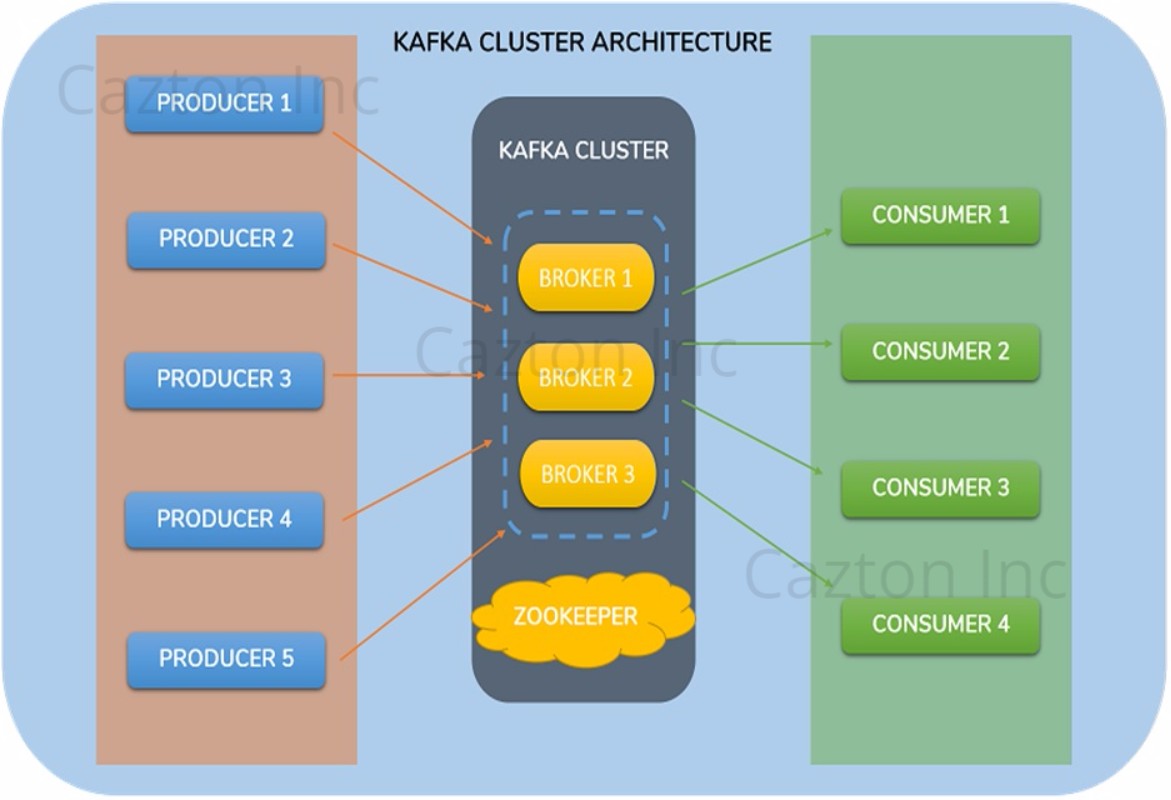 Kafka is the most preferred platform in the field of messaging systems and data streaming. It is very easy to integrate Kafka in Hadoop and AWS environment. There are more benefits of choosing Kafka for your message streaming requirements.

How can Cazton help you with Kafka Consulting?

Cazton has Kafka Consultants who can provide expert guidance for your Kafka cluster management, big data streaming and processing requirements. Our experts have hands-on experience in administrating on-premise Kafka platform and managing Kafka clusters on Windows, Linux and cloud platforms like Azure, AWS & EMC. We are well-versed with Kafka API and understand the best practices for stream management and processing.

Our Kafka Consultants have strong analytical and problem-solving skills. To name a few, our Kafka experts have hands-on experience with Big Data technologies that includes Hadoop, Spark, HIVE, HBase, Kafka, Impala, PIG, Zookeeper etc., document databases like Cassandra, Couchbase, MongoDB etc. and have a proven track record of building solid production level software that processes large streams of data. We have high-level expertise in programming languages like C#, Java, Scala, Python, and R, which make our experts a great resource for your business.

Want to know more about our Kafka Consulting services?