DevOps Special: Banks, Brains, and Factories: Thinking in Promises for a Future World 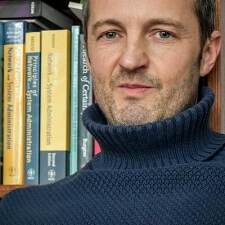 Mark Burgess is a theoretician and practitioner in the area of information systems, whose work has focused largely on distributed information infrastructure. He is known particularly for his work on Configuration Management and Promise Theory. Mark Burgess was CTO, Founder and original author of CFEngine. He was senior lecturer and then professor of Network and System Administration at Oslo University College from 1994-2011. He was the first professor with this title.

Mark obtained a PhD in Theoretical Physics in Newcastle, for which he received the Runcorn Prize. His current research interests include the behaviour of computers as dynamic systems and applying ideas from physics to describe computer behaviour. Mark was the principal author of the popular configuration management software package CFEngine for 20 years, and was the founder, chairman and CTO of the Cfengine company. He has led theoretical and practical contributions to the theory of automation and policy based management, including the idea of Operator Convergence and Promise Theory. He is the author of numerous books and papers on Network and System Administration and has won several prizes for his work.